HomeenWhat is a hydration reaction?
en What is a hydration reaction?

The branch of chemistry in which the term hydration reaction is used the most is in organic chemistry. In this case, a hydration reaction is understood as any reaction that involves the addition of the elements that make up the water molecule to a multiple bond or to a ring subjected to great angular strain (such as a cyclopropyl group or an epoxide group). The reaction involves the breaking of a bond, either one of the pi bonds in the multiple bond or one of the sigma bonds in the case of stressed cycles, thus reducing the number of unsaturations in the parent compound.

In this type of reaction, one of the two atoms that were originally linked by means of a double or triple bond, is linked to a hydroxyl group (-OH), while the other receives a hydrogen atom, thus completing the two hydrogens. and oxygen that make up the water molecule.

It should be noted that, although the net reaction of hydration is the addition of a water molecule to the structure of an organic substrate, the hydroxyl group and the additional hydrogen atom do not necessarily come from the same water molecule. On the other hand, depending on the type of substrate involved, the hydration reaction can produce different types of products, giving rise to several different types of hydration reactions. These are described below.

These reactions can be carried out in many different ways and using a wide variety of different reagents or catalysts. The simplest of all is the acid-catalyzed hydration reaction of alkenes, such as the one presented below by way of example.

As in the case of alkene hydration, alkyne hydration is the addition of an –OH group and a hydrogen atom to two carbon atoms linked by a triple bond. The reaction involves the breaking of one of the pi bonds of the triple bond, thereby reducing the unsaturations of the molecule by one.

The initial product of hydration of alkynes is an enol (the combination of an alkene and an alcohol) in which the hydroxyl group is bonded directly to an sp2 -hybridized carbon atom that is part of a double bond with another carbon atom. carbon. This type of compound frequently undergoes a rearrangement process, through which it becomes a carbonyl compound. Depending on the substitution pattern of the parent alkyne, this carbonyl compound may be an aldehyde (if it was a terminal alkyne) or a ketone (otherwise). The following chemical equation shows the general hydration reaction of alkynes.

The latter rearrangement equilibrium between the enol and the respective aldehyde or ketone is known as keto-enol tautomerism, and almost always favors the formation of the latter.

Aldehydes and ketones are carbonyl compounds, that is, they contain a double bond between carbon and oxygen. This double bond can also undergo a hydration reaction, in which case the hydroxyl group adds to the carbon atom while hydrogen bonds to the carbonyl oxygen, converting it into a hydroxyl group. The final product of the reaction is a double alcohol (or diol) with two hydroxyl groups attached to the same carbon, which is called the geminal diol. The general reaction for the hydration of aldehydes and ketones is presented below.

Depending on whether R 1 and/or R 2 are hydrogens or alkyl groups, it is a question, respectively, of the hydration of an aldehyde or of a ketone.

Unlike organic chemistry, in the field of inorganic chemistry , hydration reactions are those processes in which an anhydrous salt absorbs water molecules, in well-defined stoichiometric proportions, to form a hydrate . This is not the salt getting wet, but rather a chemical reaction in which water molecules bind to the cation of the salt (usually through coordinate covalent bonds) and become part of the crystal structure of the salt. compound.

Not all salts undergo hydration reactions. For example, sodium chloride (common table salt) does not. On the other hand, other salts have a very marked tendency to absorb water molecules from wherever they can find them, such as copper (II) sulfate.

Having established all these terms, we can then define a hydration reaction in inorganic chemistry as the chemical reaction by which an anhydrous salt reacts with water to form a hydrate. The waters of hydration are indicated as part of the hydrate formula by placing a dot after the anhydrous salt formula, followed by the number of water molecules for each salt formula, and finally the water formula ( H2O ) . 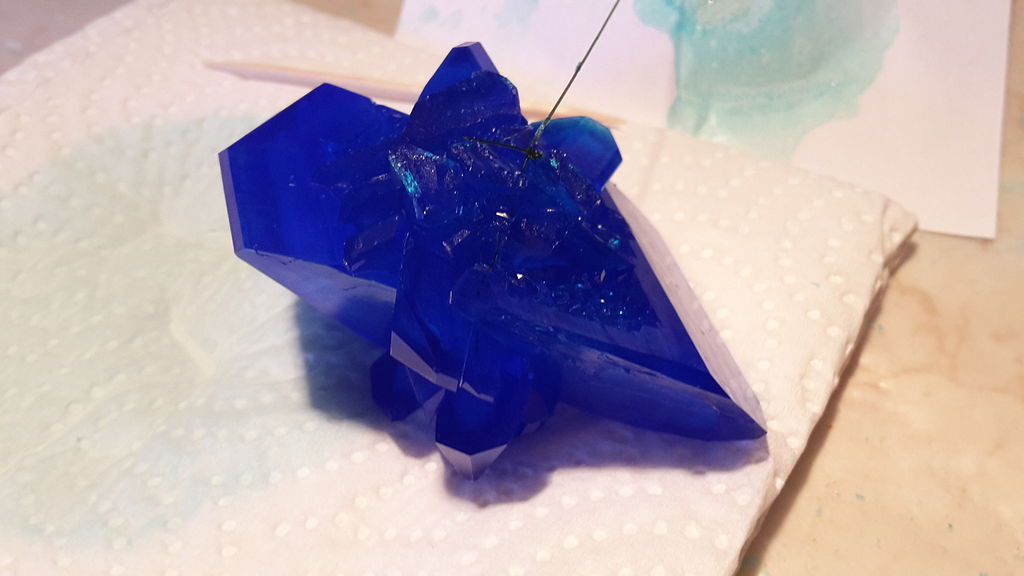 The following is an example of a hydration reaction involving copper(II) sulfate:

How does hydration of anhydrous salts occur?

On the other hand, the hydration of anhydrous salts can also occur spontaneously when said salts are exposed to humid air, in which case the hydrate is formed by absorbing water molecules directly from the gas phase.

The water molecules of hydration are easily distinguished from the water molecules that wet or moisten the solid after separating it from the mother solution by filtration or another separation technique, in that these do not evaporate easily. In fact, crystals can be dried for long periods at moderate temperatures without dehydrating the salt. This is due to the fact that the hydration molecules are strongly linked and trapped in the crystalline structure of the solid (they are part of said structure) and a minimum of energy is required to break this interaction.

Previous article
Where does the wax or paraffin go when a candle burns?
Next article
12 examples of the use of the present progressive in Spanish