Eridu was one of the first permanent human settlements in Mesopotamia and perhaps also in the world. The dating of the lower levels of the ruins reveals that they correspond to the year 4900 BC, being the heyday of the city at the beginning of the fourth millennium. Eridu was located about 26 kilometers south of the present city of Nasiriyah, in Iraq, and about 24 kilometers from the ancient Sumerian city of Ur.

At the site of the settlement, 19 levels corresponding to various moments in the evolution of the city have been identified. The levels, identified during excavations in the 1940s, display mud brick architecture built between the early El Obeid and late Uruk periods.

Originally, the city was possibly built near the coast of the Persian Gulf, on a network of canals; however, due to the accumulation of sediments transported by the Tigris and Euphrates rivers, the coastline is currently far from the archaeological site. 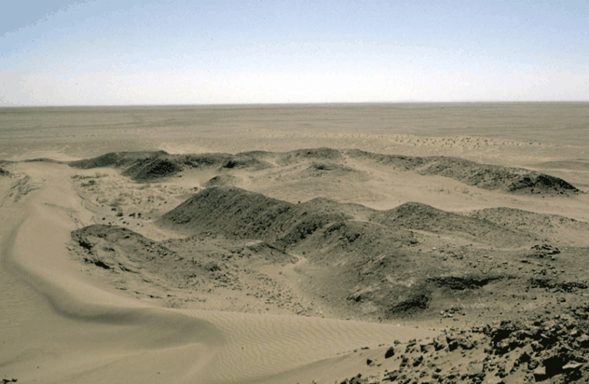 The archaeological site is formed by an immense mound, an oval raised about 7 meters, product of the accumulation of superimposed ruins during thousands of years of occupation, as shown in the figure above. The lower levels correspond to the accumulation of the remains of buildings from the El Obeid period, while the most recent levels correspond to the remains of the Sumerian sacred enclosure, a tower, a temple and a complex of other structures, surrounded by a wall of stone. The city would have come to cover an area of ​​40 hectares, including a residential area of ​​20 hectares and an acropolis of 12 hectares.

A distinctive feature of Eridu is its ziggurat-shaped temples. The ziggurats were the characteristic temples of Mesopotamia, built in the shape of a pyramid on a rectangular or oval base; they were accessed by side or spiral stairs. The oldest temple consisted of a small room with a niche and a table for offerings. Later temples were larger and larger, following the ziggurat format. Enki’s ziggurat, the House of Waters, remains in our times.

The excavations revealed evidence of abundant pottery activity in the El Obeid period, with a large number of scattered work items and remains of kilns. The main economic activity of the oldest settlement was fishing. In the excavations, fishing nets, bales of dried fish and reed boats were found. 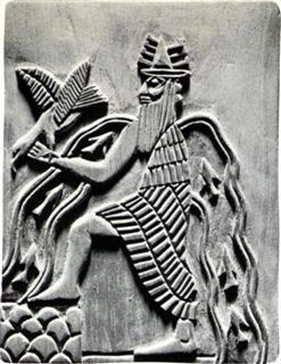 The legend about the founding of Eridu

Recovered from various documents, the first part of the legend about the founding of Eridu alludes to the mother goddess Nintur, who called her sons nomads and advised them to settle in the city, build temples and live under the rule of kings. The second part of the legend tells of the long reign of Alulim and Alagar.

The legend also describes a great flood caused by the god Enlil. Nintur warned the king of Eridu, Ziusudra, about the flood, entrusting him to build a boat to house a couple of every living thing and thus save life on Earth. The legend is taken up again in the Old Testament in Noah’s ark and in the story of Nuh in the Koran.

Eridu was losing relevance while the importance of the city of Ur grew. But until its disappearance during the sixth century BC it had a significant role, being the place of residence of the Neo-Babylonian ruling family.